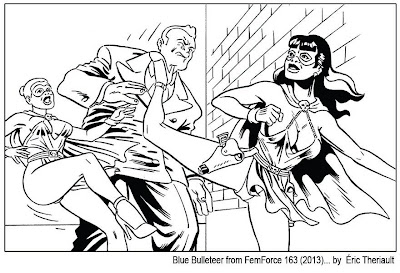 Last year,  I was working in an animation studio called Image Entertainment (not to be confused with the comic book company) as a character and prop artist, basically assisting the main designer on her art for the Walter and Tandoori show.

Basically, I was doing most of my 5 days week work in 3 or 4 days. That left me with a lot of time to doodle and listen to the radio. That was soon to change, because my wife would go back to work and we would have to share our Baby duties. The opposite happened : I had to take time on the week end to finish the week's work.

But before that happened, I decided that my doodling should at least have some goal. I wrote to Mark Heike, main editor at AC Comics and offered him to do layouts for their FemForce book. The reason why it's only layout is because I had no acces to references or a computer. Everything had to come from experience. I asked him to do a Blue Bulleteer story if that was possible, their version of Phantom Lady. Mark quickly sent me an 8 pages script by Maura Grundmeyer and Mark S. Dail, and I had some fun doing thumbnails and body structure sketches. Months later, here is the result: Mark Heike tightened my art into a ready-to-ink page, and Scott Shriver  did the finished ink work.

By that time, I also had heard that the cover of issue #163 was to have a variant cover by the late Eduarto Barreto ! I'm a big fan of his work. This south american artist chanelled some energy from old classic artists like Alex Raymond and Harold Foster. Fluid linework, solid drawing, nice black and white...I recall especially the Martian Manhunter: American Secrets (1992) mini-serie.