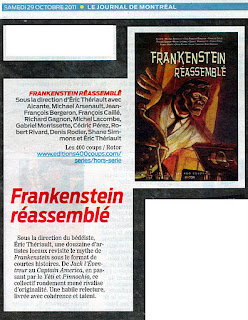 No comments:
Email ThisBlogThis!Share to TwitterShare to FacebookShare to Pinterest
Libellés : francais, Frankenstein

Hello ! Check me out at stand 161 at the Montreal Comic Con this Saturday and Sunday at Place Bonaventure in Montreal, Quebec, Canada-- I'll be there signing my solo and my collective books: Veena et les Spectre du Temps and Frankenstein Réassemblé. Stand 161 is the stand of Planete BD, representing my publisher 400 Coups. I may have a new color print to sell. It's a little thing I just finished with Gogo Yubari, that Kill Bill iconic character . 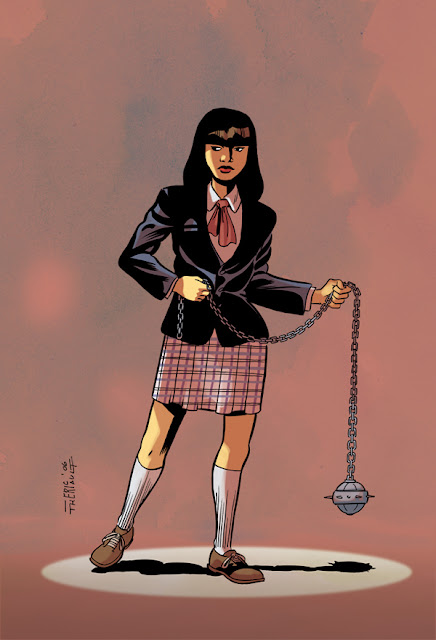 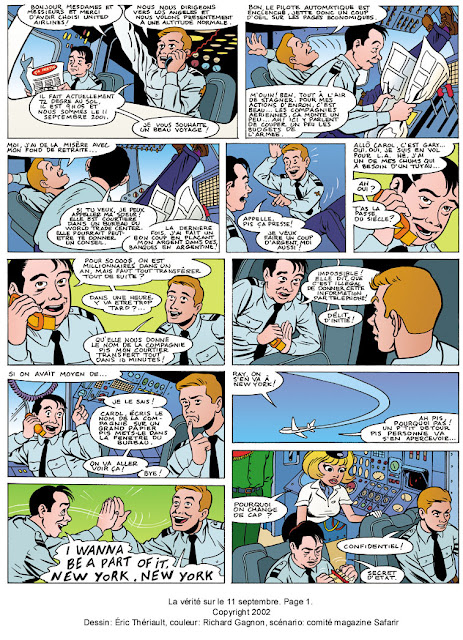 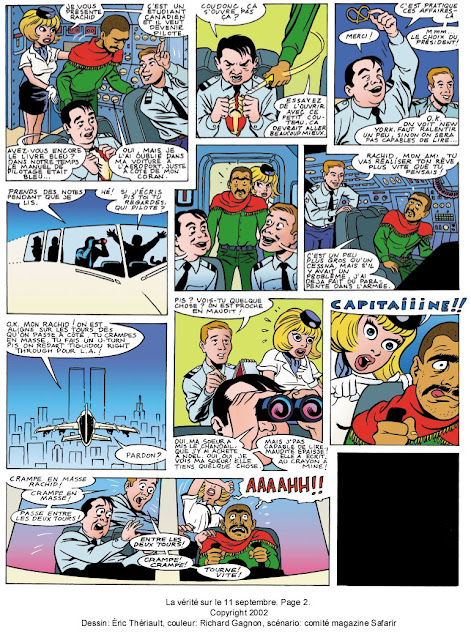 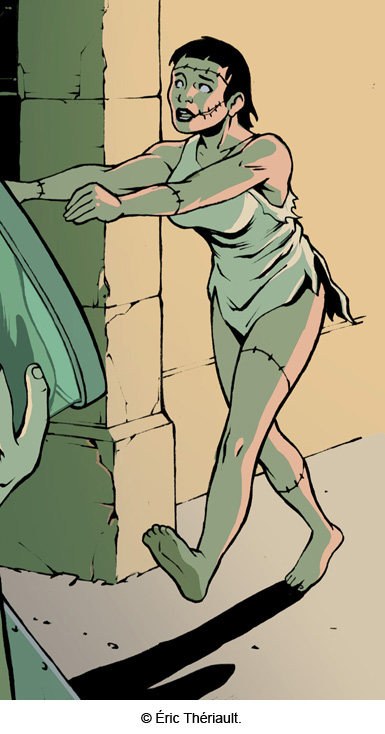 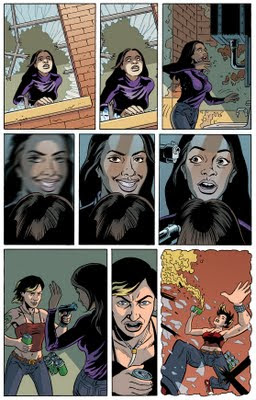 Even if I only post once in a while, there's more on tap: I just finished pencilling the first book (24 pages !) and only have a few pages to ink and color. So, september will see the beginning of the work on  number 2.
No comments:
Email ThisBlogThis!Share to TwitterShare to FacebookShare to Pinterest
Libellés : BBDC, comic book work, english, studio 3265

The adventures of Tintin in the Uncanny Valley !

Joke for animators and 3D artists only ??

Uncanny Valley :  "The uncanny valley is a hypothesis in the field of roboticsand 3D computer animation, which holds that when human replicas look and act almost, but not perfectly, like actual human beings, it causes a response of revulsion among human observers. The "valley" in question is a dip in a proposed graph of the positivity of human reaction as a function of a robot's human likeness." 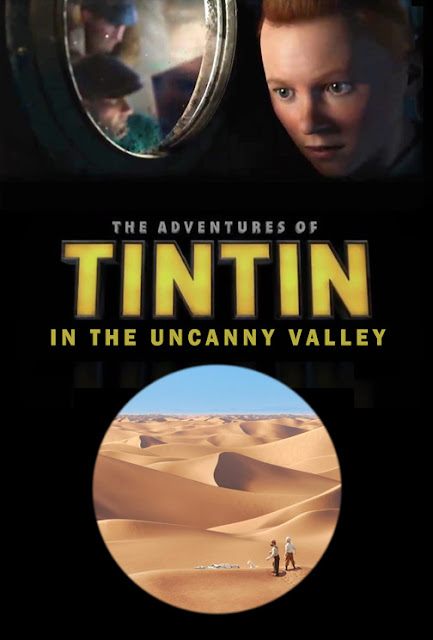 I'm testing a little thing in Google+ that...

3 comments:
Email ThisBlogThis!Share to TwitterShare to FacebookShare to Pinterest 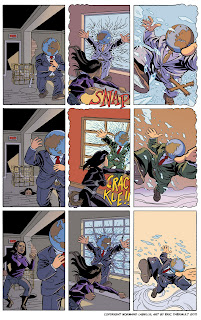 "The scripts and art are excellent throughout (...) Frankenstein Réassemblé is an immensely satisfying read and a truly original contribution to the ever growing collection of alternate histories of Frankenstein."

No comments:
Email ThisBlogThis!Share to TwitterShare to FacebookShare to Pinterest
Libellés : francais, Frankenstein 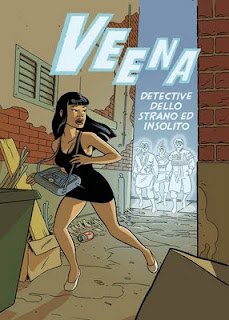 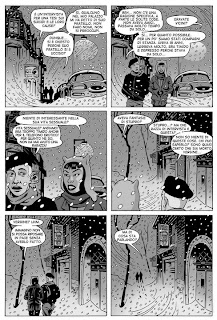 E.F. edizioni just published and distributed the italian edition of Veena. It's called "Veena, Detective dello Strano ed Insolito" and contains material from issue 1-2-3-4, plus an illustration galery. Size is 16,5x24 cm. 70 pages. To order, here is the place. You'll need to understand a few italian words to navigate there:
EF Edizioni 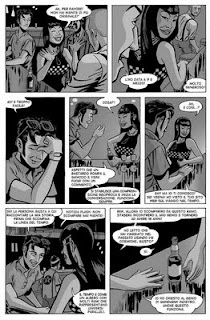 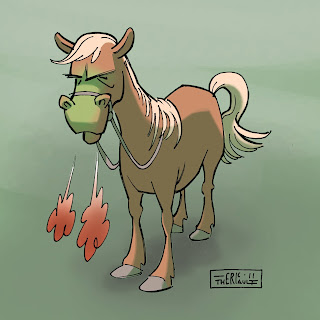 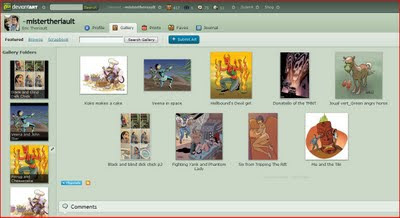 There. It's done. I have one now.
I was resisting having one. At first I thought only amateurs were posting there, but I've since changed my mind. A lot of beautiful artwork by gifted artists there is....
It's when I realised that Clement Sauvé had an account there, and many fans, that I changed my mind. I'll try to post a drawing each week.

I'm not crazy about the green ugly background, but I'll live with it.
No comments:
Email ThisBlogThis!Share to TwitterShare to FacebookShare to Pinterest
Libellés : cheesecake, english, fanservice, illustrations, studio 3265 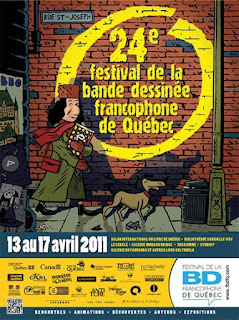 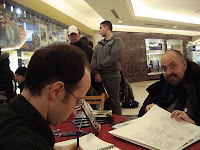 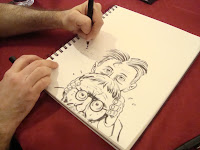 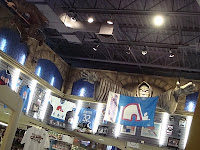 One more page from Black and Blind Dick Chick !

If you have the curiosity to know what's behind this story, maybe you'll want to see Cinecomix. That's the webcomic that Normand Labelle did a few years back. He did everything: writing, photo, manipulation, lettering, etc...It's a photo-novella. Basically, what i'm drawing now is an adaptation of that work in comic format.
No comments:
Email ThisBlogThis!Share to TwitterShare to FacebookShare to Pinterest
Libellés : BBDC, comic book work, english, studio 3265 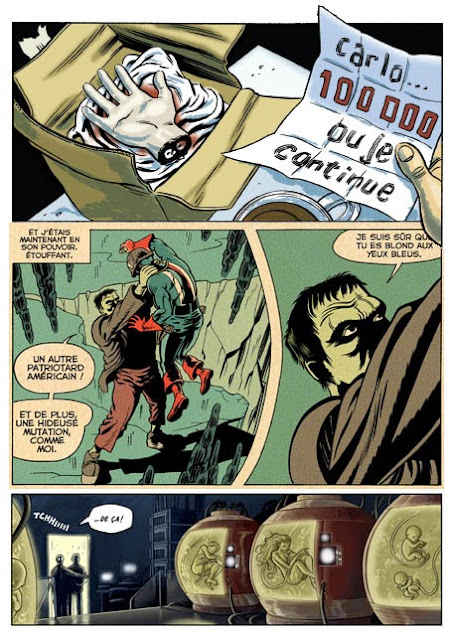 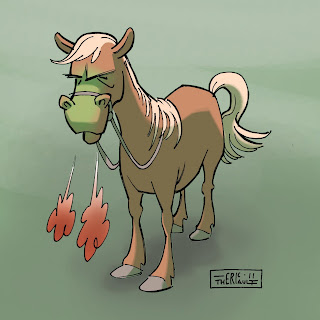 On January 26th, 2011, I lost a great friend and an extraordinary artist, a unique inspiration. Clément Sauvé died of a virulent cancer at the age of 33. He left us and nobody will ever fill this emptiness...

***
Summer 2000.
The first memory I have of Clement Sauvé is when I came in to share the studio space where he worked with Yanick Paquette. I think Yanick was interested in saving some money on the rent and wanted to add one more artist. I was looking for some working dynamic that was not the Drawing-table-next-to-the-bed thing. That might not have been the first time I met Clement, but that's the first I remember. A while before that, he was a student in Grégoire Bouchard's comic class at Cegep Du Vieux Montreal (Old Montreal College), and I may have seen him when I was a guest speaker there. 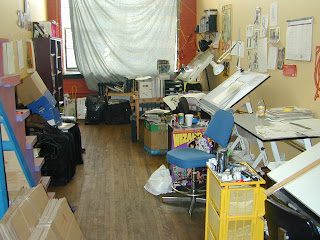 The loft was a thin long industrial space with greasy floors from the heavy machinery that was there when the Grover building was a factory, decades ago. Now it's a coop that rent loft space to artists, mostly.
We had three tables placed next to each other on the same wall. Yanick and Clément were working together on Gambit, then Codename: Knockout and Gen 13. Yanick was the main penciller and Clément was his background artist, also doing technical stuff like guns and spaceships. I was working on my indy comic book: Veena. Behind us on the wall, there was a sort of clothesline, where comics pages were hung. Yanick and Clément basically worked on many pages at the same time, and traded them back and forth. Clément was already a very meticulous and precise designer. His work was beyond what is usually expected of backgrounds in American comics and closer to what is the norm in European bd. In between some of the comic book work, he sometimes did animation design for a client. It's there that I could see the style that he would develop in the years to come. Less realistic, closer to Japanese stylization. But, it was hidden to fit his "master's" style. Yes, because Yanick called Clément, his personal slave ! Anyone else would have been really insulted, but Clément had a very strong and sarcastic sense of humor...he accepted this and even pushed the joke himself, loudly repeating this in conventions, very secure in the power of real work and confident that real compliments are earned.
Behind us, there was a small tv broadcasting bad sitcoms and some of the worst infomercials...an unlimited source of humour for Clem !

I'm trying to remember if we ever worked on something together...

Two things come to mind: In 2001, I published a book called Flirt. It was a black and white pin-up book with about 60 artists mainly from Montreal, but also from France, the US and a few other places. While I was at our shared studio, I asked Clément to contribute a piece. He kindly accepted and brought back a sort of android girl standing sideway, looking away with robotic arms. At the time, he was not inking himself. He asked his friend Serge Lapointe, still in Québec City at the time, to do that part. His themes were already apparent in this piece, the military attitude, the huge bolts and underneath all the flesh, a robot. This may be his first published artwork that was signed . At the time, his work with Yanick was uncredited.

The second one is an issue of Terra Obscura. Late in 2003, this is the last issue of the ABC/Wildstorm mini-serie and it's almost late. Deadline crunch come in and every penciller around Yanick Paquette pitches in to save time here and there. I did a full page,  a flashback to the forties with the characters in their Nedor era costumes, my wife modeled as the first female black US president, Michel Lacombe did a 2 page spread drawn in the style of Egyptian hieroglyph and Clément was back in his role of background artist doing the toughest thing: one page full of old cars piled on top of each others...The day was saved, the book was on time !

Beyond those times where we worked closely together, during the rest of his career where he worked at home and he developed as a natural stylist, I basically saw him in the parties my wife and I did at our apartment, some book launches and his weekly visits at Studio 3265. He biked every week to the comic shop and he came to visit us before or after. Work usually stopped right there.

Clément was the soul of every friend's gathering, people came around to hear him tell anecdotes about the bizz and funny jokes. He had a way with the hyperbolic comparison, analogies so overblown and hysterical. 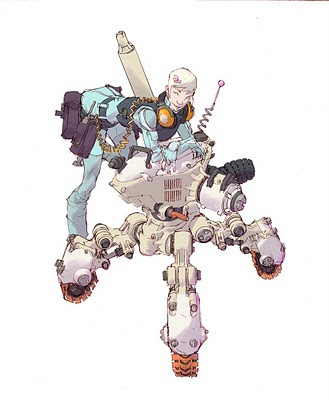 His career had some up and down, and we had a saying about "The Curse of Clement". Temporary difficulties with graphic designers, editors, legal department and such. But when I think about him now, I feel that there was no curse. He had his difficulties like every one, but he just made it interesting while he was telling the story. In fact, he was a winner. Someone who worked real had and earned what he got. In the end, he got a good career, a good reputation, and he also met Dominique ! How could that be "The Curse of Clement" ??

Except the ending, of course.

Here's page 3, inked and colored. I'll let the lettering out at this point. That way, you'll have to guess what's it's all about.

Normand Labelle is the writer and he's hired me to pencil, ink, color his project called Black and Blind Dick Chick. Usually, the way these things are done, a proposal is done to show the eventual publisher what is it all about and what it will look like. But were already past that point: happy with the result, he asked me to finish issue one. So, that mean a full 24 pages !

Here's page 2 ! A project written by Normand Labelle. Not the most unusual thing i've done, but pretty high in that regard. Of course, some of the comic jams were off-beat, but this is a bit different.
1 comment:
Email ThisBlogThis!Share to TwitterShare to FacebookShare to Pinterest
Libellés : BBDC, comic book work, english, studio 3265

I'm presently working on updating the blog design with new functions.
It might look weird for a few days. And some links won't be available...

The usual site is available with this link.

Update:
It's pretty much done now for the design. I'll tweak the links, but that's about it.
No comments:
Email ThisBlogThis!Share to TwitterShare to FacebookShare to Pinterest
Libellés : english
Newer Posts Older Posts Home
Subscribe to: Posts (Atom)