Star Wars Expanded Universe dies and me too !

The Church of Star Wars has recently declared that the Extended Universe is no longer canon ! Like a religious edict, it means that everything that was not part of the movies (comics, novels, games) is no longer deemed to have "happened" and with it Tungo Li, the character based on my face dies !!


It's true, i'm not making this up...In 2006, Michel Lacombe was the great artist behind the Star Wars Rebellion comic and was asked to create the visuals for a new character that was to be the chief of the spy network of the Rebels. A few photos and my face was used to create him. 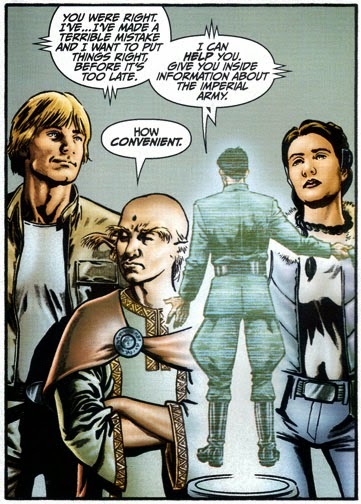 I get to say that Luke Skywalker is just an "emotionally imbalanced farmhand" and get away with it.
But sadly, I won't be called to play my role in Star Wars VII....


Star Wars Rebellion, written by Rob Williams and drawn by Michel Lacombe with help by myself on background and photos (camera and model !) .