We have some friends and we may have enemies, and then we also have friends we never met. Dennis Eichhorn was one of these. A friend I never met.
Dennis, as you may know, was a writer of many things, and among them was the well-known Fantagraphics comic book, Real Stuff. 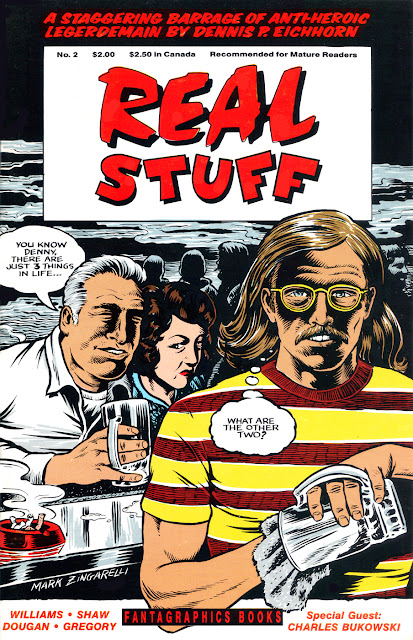 I was a happy reader of that book as I had been a follower of all that "autobio" trend that arguably began with Julie Doucet and Chester Brown (I'm not forgetting Pekar and Crumb, but I don't view them as belonging to that particular wave). If one was to classify the style of Dennis' writing, we would have to say that he was an Hemingway or a Bukowski among Kafkas and Woody Allens ...
Not all his stories were illustrated by super talented people. The art varied from weak to extraordinary. One day, i thought: well, I can do much better than *that* one. I made a pile of photocopies and an introduction letter stating that I'd like to illustrate one of his stories. A few weeks later, I opened my mailbox and found a story to illustrate. Just like that, I had my first professional comic book job!
So I do feel I owe him something. Maybe not my career, but at least part of my self-confidence... Thank you, Dennis !

Note: I also did an eulogy for Kim Thompson who was the editor for that book, here.