I just found the website of an artist that I've been trying to find for a long time: Mark s. Fisher. I read his stories in Heavy Metal magazine in the early to mid '80s. His stuff was surreal and new wavish, not what you'd expect to find in there. They where the kind that I could scrutinize for a long time, some sort of parallel new wave/retro/sci-fi world. I found no trace of him outside of HM for a very long time, no interview, no work that I could see outside of comics...until the advent of blogs, where every one can post online easily. His blog, here. There's not a lot of info in there but lot's of art.
At the time, there were sexy women in HM, sure, but not the tacky big-breasts fetish that Kevin Eastman has imposed there after he bought the magazine. You could find a lot of surreal, ligne claire, Memphis style, new wave, film noir aesthetic, most of it translated from European magazines like Métal Hurlant, Charlie, Écho des Savanes, El Vibora, Frigidaire and others. There was also some american works that were very new and interesting. That's where I discovered Charles Burns, Lou Stathis, Drew Friedman, Rod Kierkegaard, Paul Kirchner and...Mark Fisher!
The was an alternative vein in there. It's true that Raw magazine was not that far away...
2 comments: Liens vers ce message
Email ThisBlogThis!Share to TwitterShare to FacebookShare to Pinterest 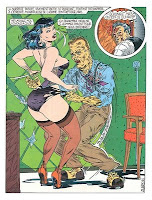 Since Veena has an obvious visual link to Betty Page, I guess I should post this here too.

It's a sad news. I "discovered" her in 1981 while reading Metal Hurlant. Her likeness was used for a character in Bois Willy, the serie that Denis Sire wrote and drew back then. That was way before Dave Stevens's Rocketeer. I guess Sire and Dionnet, his editor, knew of her appeal before most of the planet remembered her in the 90's.

Betty Page seen thru the eye of Denis Sire has probably been a strong influence for me. I'm actually working on a Veena story where Betty Page is not seen but has a big importance.

So her presence will be with me for a long while...

I had an earlier post with some picture I did of her here.
1 comment: Liens vers ce message
Email ThisBlogThis!Share to TwitterShare to FacebookShare to Pinterest
Libellés : cheesecake, history
Newer Posts Older Posts Home
Subscribe to: Posts (Atom)